We’ve been hearing a lot about dinosaurs and other prehistoric discoveries recently.  From newly found dinosaurs to fossil excavations, here are some news worthy stories we’re reading this week!

In China, a fossil of a four-winged dino was discovered with the longest feathers scientists have ever seen on a dinosaur fossil. This 125 million year old raptor named Changyuraptor Yangi or Great Feather in Chinese will help scientists learn about the flight patterns of larger creatures as well as the evolution of larger flying animals today. Check out some photos of the fossil! 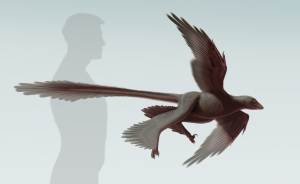 According to the Washington Post it flew, had four wings, and its feathers were one-fourth the size of the dinosaur’s entire body.

How about this one: In Wyoming, a cave that was dormant to human exploration for the last 30 years is finally getting excavated. Trained international scientists will rappel eight stories down into the cave and climb back up. Once they are at the bottom, “they will load fossils into buckets to be hoisted to the surface” (Reuters). However dangerous this climb is its going to be worth it. Inside the cave may be hundreds of undiscovered fossils dating back as far as 100,000 years.

Interested in getting some fossils of your own? Dapper Cadaver’s got you covered.  Check out our website for the newest in dino skeletons and fossils. How about your own Avian Dinosaur Fossil or a Pterosaur Skull to add to your collection?