A few of the specimens they have on display. source: Newsweek

We love this! There is now an entire museum devoted to death and macabre in Brooklyn. The Morbid Anatomy Museum showcases items “exploring the intersection of death, beauty, and that which falls in between,” according to their website. The museum’s curator; Joanna Ebenstein, grew the museum from her Morbid Anatomy Library “including more than 2,000 books on medical history, death rituals, the human body and esoterica” (New York Times). It recently moved into its new home, a 3 story former nightclub on 3rd Avenue in Brooklyn. 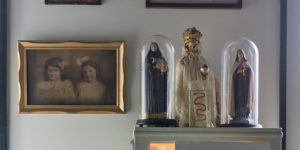 The museum is currently showcasing an exhibit on “The Art of Mourning,” displaying pieces related to 18th-20th century mourning culture including hair art jewelry and shadowboxes, morbid photography, and death masks.

They even hosted a macabre flea market last week with vendors selling  curiosities, bones, and taxidermy. We wish we could have gone! On the east coast? They have frequent lectures and guests so be sure to check it out.

One thought on “Death on Display: Morbid Anatomy Museum Opens in Brooklyn”